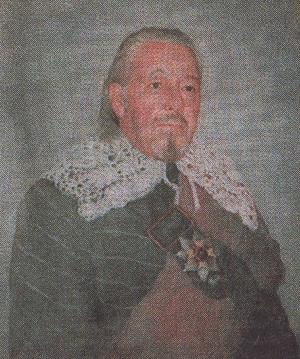 Sadly, Bill Annetts, Colonel in Chief of the modern Earl Rivers Regiment of Foote, died on 23 December 1997. He had risen to become Colonel-in-Chief during 27 years’ service in the Sealed Knot.

The castle’s ruined battlements once more resounded to 17th-century gunfire when Bill’s ashes were scattered by his comrades following a moving memorial service. Following the disclosure that Bill’s wish was to have his ashes scattered from the muzzle of a cannon, the event received much media attention with high profile articles in the following days Times, Telegraph, Independant and Daily Mail, not to mention coverage by local television and newspapers.

His widow, Joyce, 68, said: “Bill adored his time with the Sealed Knot. It became his life. He travelled all over the country with fellow members and had a wonderful time. He shot himself in the leg with a musket in Jersey during one battle re-enactment, but instead of putting him off he treated it like a war wound. If anything, it encouraged him to carry on. His wish was to be scattered by cannon and we are all too happy to honour that wish. It’s what he wanted.”

Upon the death of the late and much loved Col. Bill Annetts Earl Rivers Regt.

Bill left us to join His Majistie upon the eve of Christmas 1997. Earl Rivers, Col. Stephen Hawkins and Sgt.Major Skippon’s Regiments were all in attendance at the family service at Shaw (upon the site of 2nd Newbury) to pay their respects to the member who gave birth to these and other present day SK units. Bill left us in his full dress uniform, draped with his beloved Griffin standard of Sir John Boys.

Bill joined the Knot back in the late `60s following his love of the sword and thirst for adventure. His first and fondly remembered regiment was Hinton’s Greycoats where he began his rise through the ranks. Bill was very proud of the number of regiments that sprang from Hinton’s, apart from the three mentioned previously, connections to the foundation of a number of other regiments can be found (Northamptons, Capels, Rawdons, Southern Bye- Trayne ANY MORE?).

There was in those early days a very successful “Triumvirate” and Bill was very fond of his close links with the dearly departed Roger Holt and Wilf Emberton, if we look back now these three fine characters contributed vast efforts and are all a very sore loss to the SK. Between them they gave many of us an awful lot of pleasure and undoubtedly actively furthered the aims of the SK through hard work and sound leadership.

I first met Bill around the campfire at my virginal muster (Oxfordish?), as a new recruit I was taken under his wing and plied with his home made brews. Following a mighty good time in an ale house the regiment marched back through the streets of Oxford, arm in arm. I was infected and hooked with the jolly brotherhood of the Knot.

Bill always had encouraging words for his regiment and knew when stern ones were required for an uppity pikey who’s lust for the fray faltered {in the face of Ballards coming downhill & outnumbered 4:1). His affibleness and humour at banquets were a joy to perceive. I once had what I first thought was an honour, assigned a sleeping place next to Bill in a barn and told to keep an eye on the old boy as he had recently recovered from a heart attack. Through a very drunken and much needed slumber, I was awoken to the most awful guttural rasping sounds. Thinking this was it for Bill, I shot up and attempted resuscitation. Bill gradually opened his eyes and when I asked if it was his heart, he only questioned why I was kissing him later telling me that someone should have told me about his infamous snoring.

In later years it was this organ that made him take the field with me at the back of the block, frequently though he would wink at me (all that kissing see!), flash his wicked grin and we would pile on the back to give a hand.

Bill was a much loved leader of Earl Rivers and their are many things we will all remember about how he ennobled our lives, for me he portrayed the fatherly love that was befitting his role. He lent me his sword to cut our wedding cake, he carried my first son to his Christening and he would argue the toss with me at the drop of a baldrick.

His other great (must mention the gorgeous Joyce) romance was with the character of Sir John Boys, the brave and stout defender of Donnington Castle. At our many re-enactment’s in Newbury, Bill’s eyes would mist over and he really was back there in Sir J.B.’s bucket boots. Bill had many occasions to quote the heroic words at the summoning of the castle and these very much sum up our memories of this devoted cavalier:

“Carry away the castle walls themselves, if you can; but with God’s help l am resolved to keep the ground they stand upon or will die upon the spot” (Col. John Boys to Earl of Manchester, November 1644)