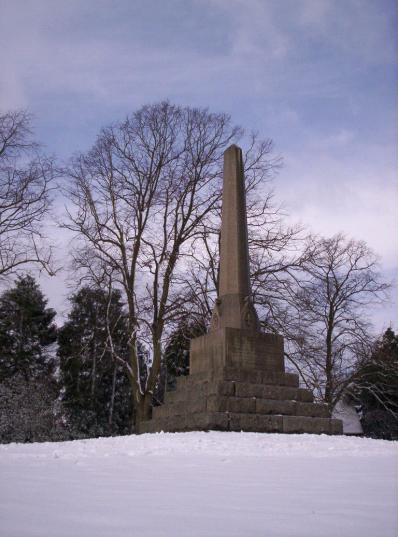 Last Monday the Falkland Memorial on the battlefield of Newbury was unveiled by the Earl of Carnarvon. The memorial was suggested some time ago by Mr. Walter Money, F.S.A., a local antiquary, who presented a site on Wash common, within a short distance of the spot where Lord Falkland fell, and it has been erect by Messrs. W. and T. R. Freeman, of Westminster, from his design.

It takes the form of obelisk, and is built of Cornish grey granite. On the four Sides of it are inscriptions, the chief of which is:

In Memory of those who, on the twentieth September, 1643 fell fighting in the army of Charles the First on the field of Newbury, and especially of Lucius Cary, Viscount Falklands, who died here, in the 32nd year of his age, this monument is set up by those to Whom the majesty of the Crown and the liberty of their country are dear.

The day’s programme included a procession of the Mayor and Corporation, Yeomanry, Volunteer’s, oddfellows, Forester, lodges of Freemasons, and others, which, headed by the band of the 49th Regiment, marched through the principal streets to the site of the memorial, where the ceremony of unveiling was performed, amid enthusiastic cheers, by the Earl of Carnavon, who said :

Mr. Mayor, Mr. High Sheriff, Ladies, and Gentlemen, I have to congratulate you, first of all, on the completion of the work on which we have been so long engaged, next upon the beauty of the day which smiles upon our proceedings and, thirdly, upon the great concourse of people gathered around us this afternoon. I trust, as the Mayor has said, that this may be an ornament to this place and town, and handed down to our children’s children. The legal trust is vested in me and another gentleman; but we look to you to watch over it, to guard it, to preserve it. On this field, as the Mayor has truly said, the battle of Newbury was once fought and Lord Falkland fell. And why do we now erect this monument? We erect it not to perpetuate the memory of by gone feuds we erect it not to exalt any one party or set of opinions but in order to commemorate great events in which we are all interested, and to do honour to the memory of a man of singular purity, unselfishness, and honour. Lord Falkland was a gentleman, a scholar, a statesman, a reformer of political abuses, and yet a lover of the Crown. Living in troubled and painful times, he reconciled, as far as was given man to reconcile, the complicated duties of his age, and, dying, he died without fear and without reproach. It only remains for me now to unveil this memorial, and make it public

At two o’clock luncheon was provided in the Corn Exchange, and was partaken of by about 600 or 700 persons. Mr. C. S. Slocock J.P., the Mayor, occupied the chair, being supported by the Earl of Carnarvon, the Countess of Portsmouth, Lady Winifred Herbert, and Sir Robert Phillimore The loyal toasts having been drunk, the chairman proposed “The Houses of Parliament,” Coupled with the health of Lord Carnarvon. His Lordship, who was enthusiastically received, replied at considerable length. He said it was impossible to find words to express his thanks for the chairman’s kind words and for the kindly feeling and overflowing goodness which lie always met with in the town of Newbury. His Lordship then gave a long and interesting address on the life of Lord Falklands, and concluded by adding a few words as to the memorial which had been inaugurated that day, He referred to the various recommendations the committee had received as to the form the memorial should take, they ultimately deciding upon the monument they had seen. It stood nearly on the spot where Lord Falkland fell, and it harmonised, as he believed in its simplicity of architectural outline, with the noble character it was designed to commemorate.

A number of other speeches followed, and Lord Carnarvon, on leaving the Exchange, was loudly cheered.
We intend to give an engraving of the obelisk next week.