The following article is taken from the Christmas Special 1985 edition of A-TE-PRO-TE, The (then) Official Newsletter of Earl Rivers’ Regiment:

PILGRIMAGE TO GOODNESTONE-NEXT-WINGHAM IN THE COUNTY OF KENT

In June of 1982 Samuel Bleeps took me on a trip to visit the last resting place of Sir John Boys and allowed me to record the visit on the page that he has made his own, I am reproducing this artical as I feel that it should be of interest to the latest members and in this copy I am also able to include copies of the photographs that I took at the time as illustrations. (Editors Note: Unfortunately not all of the illustrations have copied very well so please excuse the poor reproduction) 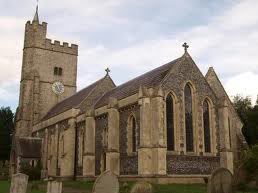 We first called in at Canterbury, where we visited the Cathedral. It seemed that one of the vicars of Goodnestone (Boy’s last resting place) was a Puritan named Richard Culmer. He took it on himself to try to break the stained glass windows of the Cathedral. A townsman saw Culmer at the top of a long ladder “Rattling down proud Becket’s glassy bones with a pike” When he asked Culmer what he was about Culmer replied “The work of the Lord” The townsman’s answer came Back, “Then if it please the Lord I will help you” With that he picked up a stone and aimed it at Culmer, with such force that if he had not ducked he would have ended up in the rubbish he was making.

From Canterbury we took the A257 Canterbury to Sandwich road, towards Wingham. Low and behold, as shown on Bleep’s ancient map, we came to a sign post pointing to the left to Goodnestone. This lane wound it’s lazy way across beautiful rolling meadows passing only small homesteads and farms until after about two miles we arrived at the small village of Goodnestone. The first sign we were to see was Boyes Lane (note the spelling)
Almost opposite at a staggered crossing was The Street which is the main, and only road of the village, and this turns out to be a cul-de-sac. With the main highway two miles or so distant, this little village of red bricked houses in a short road leading up to the pub and finally the church is just like walking into a piece of old Kentish history. Bleeps told me that in the height of summer the edges of the fields round about are ablaze with masses of poppies and a sight to see.
The church is early English period and stands at the top of a small rise at the end of the main path. As we walked through the lytch gate and up the path, passing ancient graves set on either side, I felt as if I knew that place. Possibly having read and written oh so much about Sir John Boys and his life it was to be expected.

Entry to the church is gained by the porch door just forward of the square clock tower capped with a weather vane, which stands proudly at the rear of the south side.

Passing through the doorway we found ourselves at the rear of the south aisle between the pews and the font. Standing there and looking forward towards the alter, which stands below three plain windows, I got the impression of two totally different ages, divided by columns which support the arches running centrally down the building.

On the right side of the church the roof, windows, and walls have a distintly modern look having been renovated and partly rebuilt during the 1840’s. The windows still retain the early English style with almost a total absence of tracery. The columns are plain round stone rising up to ornimented capitals and then the fluted, pointed arches go on up to and across the ceiling. However, all the old beams on this side are covered in by plaster work, giving the impression of smooth cleanliness. It is on this side, I would guess, that the main activities of religious worship would be performed, being furnished with alter and font.

The left side, however, has been spared this modernisation, and retains the stature and dignity of it’s six hundred years. This is the side of the church which engages our attention.

Looking forward in the gloom, from the head of the aisle, the central columns to our right, the first thing we note is that the entire roof on this aisle is supported by a trestle of old dark beams and is completely void of the plaster work evident on the other side of the church. At the end of the pews, which are arranged next to the columns, is the organ with it’s silver pipes rising from the oaken furniture of the instrument. To the left of the organ, mounted on the wall, is a memorial in black and white marble, inlayed in gold, depicting a knight and his lady kneeling at prayer. Looking on again passed the memorial and organ three stained glass windows can be observed above the choir screen.

Approaching the organ down the north aisle we reach the end of the pews and are prohibited further progress by the choir screen, but find at the base of the organ in front of the pews here is our goal, the tomb of Sir John Boys. The black marble ledger is set into the floor. On this ledger below his griffon, rampant, and the crown to it’s left is his inscription. part of the inscription is covered by a huge oken chest as can be seen in the photograph but only a few words of the lower corner are not visable, the wording which accompanies the illustration is complete.

“Underneath rests Sir John Boys late of Bonnington Kent whose military praises will flourish in our annales as laurells and palms to overspread his grave. Dun(gan)non in Ireland may remain a solemne mourner of his funerall; and Dunnington Castle in England a noble monument of his fame the former for the losse of its expert governer the latter for the honour of its g(alla)nt defender. To crown such eminent loyalty and(va)lour ye King Royally added to his antient scutchon a crown. Leaving no other heirs male than man(ly) deeds to keepe up his name his inheritance decended to his three daughters Jane, Lucy, Anne. In his (5)8 yeare, being discharged from his militant state below he was entertained as we hope in that trimphant state above Octob 8th 1664.”
Taking a last look round and many photographs inside and outside the church we started back up the Street retracing our route back out of Goodnestone. The name of the village, by the way is said to have come from the Saxon Earl Godwin. As the village receaded into the distance and vas again lost to view we were left with a roll of film and our memories.

Having payed our respects to our leader of bygone days we took once again to the road, this time we were to visit our hero’s birthplace. The village of Bonnington is almost as remote as Goodnestone, with far flung buildings and a church. The church is said to be the oldest one on the Romney Marsh and is called Saint Romwolds.

Not knowing exactly where Boys was born we were at a loss as to where to look. The oldest building we could find was now used as the schoolhouse In front of this building, on a small green is the village sign, depicting what appeared to be a crusading knight below an oak tree. Most of the details had been lost to the ravages of time but Bonnington could just be made out carved at the bottom of the picture. We did not know where Boys was born but at least we could say we’d been to the village of his birth.

The church of Saint Romwolds must be worth a mention in passing. Saint Romwold is the most unbelievable I have ever heard of. At the age of one day (Born in Northamptonshire in AD662) he is said to have had the power of speach. At two days old he preached at Brackley and on the third day of his life, he died. At Boxley Abbey in Kent the boy Saint was a real moneyspinner for the monks, who had a statue of the boy wonder. However strong you were or weak, if you were pure they said you were able to lift the statue up. If you contributed the required amout of money to the monks you were always able to lift it. The reason for this was that the monks had a retaining peg through the supporting post. If you payed what they considered a fair amount for their “Charity” they would craftily remove the peg and winch the statue aloft, thus saving your soul not to mention your face and good name. It is said that many a bride to be left the Abbey red faced and completely degraded in the eyes of the onlookers.

Thus the power of money influences even incorruptibles.