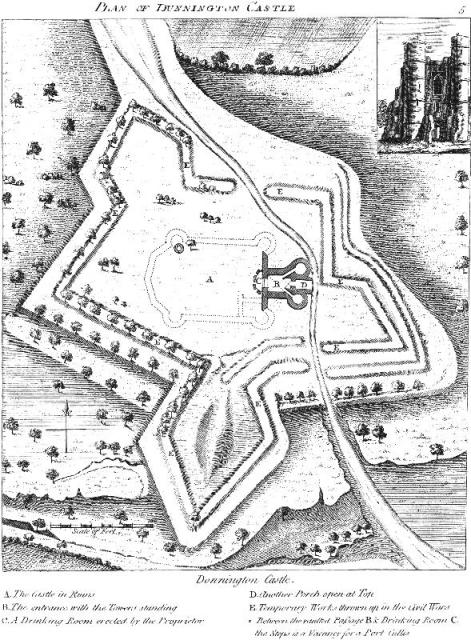 Plan of Donnington Castle.
From: “The Antiquities of England and Wales” (1783) by Francis Grose.

After the [English] civil war was over, Mr. Packer pulled down the ruinous parts of the building, and with the materials erected the house standing under it, now in the occupation of Mark Basket, esq.

The castle at present belongs to Doctor Hartley, who married the heiress of the name of Packer.

From an accurate plan, made by an officer who resides near the spot, I am enabled to give not only the figure and dimensions of the castle when entire, but also to describe the works thrown up int he civil wars;

all which he carefully traced out, amongst the bushes and briars with which they are at present overgrown.

The walls of this castle nearly fronted the four cardinal points of the compass; having the north and south sides perpendicular on its east end.

These sides were consequently parallel. Its west end terminated in a semi-octagon, inscribed in the half of a long oval.

The length of the east end, including te towers, was eighty-five feet; and the extent, from east to west reckoning the thickness of the walls,’one hundred and twenty feet.

Near the north-west tower was a well; and in the south-east angle a square building, whose sides measured twenty-four feet. Two of these sides were formed by the exterior wall, and enclosed the tower.

The entrance was at the east end, through a stone gate-house, having a passage forty feet long; at the end of which is remaining the place for the portcullis. It is flanked by two round towers: that on the fourth side has a stair-case. This gate is now standing, and is shewn in the view. In it is held the manor-court.

On its west side a small drinking room has lately been added by the proprietor.

Round about, and almost occupying the whole eminence, are the modern works, thrown up for the defence of the castle. These explain and justify the speech of Sir John Boys; which otherwise, considering its state at that time, would have been a mere rodomontade [vain boasting, empty bluster; a rant].

Their shape is that of an irregular pentagon; the greatest angle fronting the south, on which was a very capacious bastion. There was another, but smaller, on the north-west angle; and the north-east was defended by a demi-bastion, placed on its southern extremity. From the gorge of the great southern bastion, to the salient angle of the demi-bastion, ran a double, and from thence to the north-east angle of the pentagon a triple rampart. The road passed through these works, close to the gate of the castle. This view was taken in the year 1768.” (pp. 8, 9)

The caption beneath the image reads as follows:
A. The Castle in Ruins
B. The entrance with the Towers standing
C. A Drinking Room erected by the Proprietor
D. Another Porch open at Top
E. Temporary Works thrown up in the Civil Wars
* Between the vaulted Passage B & Drinking Room C. the Steps is a Vacancy for a Port Cullis.