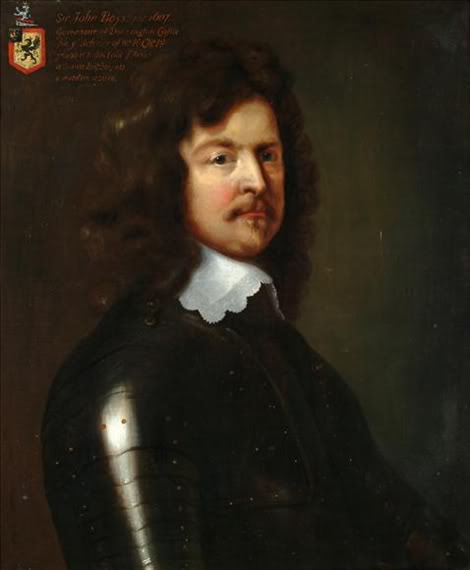 Sir John Boys (1607-1664)
Born: 1607 at Bonnington, Kent
Governor of Donnington Castle
Died: 8th October 1664 at Bonnington, Kent
John Boys Military career started at a very early age as he gained his experience as a mercenary in Flanders during the 30 years wars, when he returned to England he then late joined the Regiment of Lord Viscount Grandison during the Scots War of 1640.

After the Bishops War, he is recorded in Early 1642 to be a Captain in the Earl of Leicesters Regiment serving in Leinster in Ireland.

With the out brake of the English Civil War King Charles needed experienced professional soldiers to help inexperienced gentry that were raising regiments under the Commission of Array, so John Boys was shipped to England to be part of the Royalist army.

When he arrived in Cheshire he took the position of Lieutenant Colonel in Earl Rivers Regiment He was Colonel in all but name, as John Savage, Earl Rivers never took command of the Regiment in the field.

After the 1st Battle of Newbury he was made Governor of Donnington castle in Berkshire, holding the castle for 1643 to 1647, defending it against mant attacks, twice being relieved by the king in person. Only when the Royalist cause appeared hopeless did Boys surrender to the Parliamentarian troops, after first obtaining the king’s permission to do so.

Following the 1st Civil War he was noted as being in Holland in late 1646.

On 21 May 1648, Kent rose in revolt in the King’s name, (The Second English Civil War, 1648–1649). A naval revolt broke out on 27 May when ships of the Parliamentarian fleet declared for the King. Threatened from the sea, the three artillery forts that guarded the anchorage of the Downs, Deal, Sandown and Walmer surrendered to the Royalists and Dover castle was besieged.

Boys returned to Kent in August 1648 disembarking at St.Johns, Thanet with 1500 Dutch mercenaries and some English Gentry, they took part in the attack on the Parliamentary troops under Husbands, Axtel and Livesay near Sandown Castle, Kent and made a futile attempt to raise the Siege of Walmer Castle in Deal, one of the Cinque Ports, and customary home of the Lord Warden. He is described as;

“Sir John Boyce, the old rob carrier of Dunnington Castle, shot in the belly, pricked in the neck and wounded in the head with the butt end of a musket”.

On the 4 August some troops landed, under Lord Hopton and Sir John Boys, but a parliamentarian troop of horse charged and drove them back to their ships.

“”A party of some 80 of his [Prince Rupert’s] men, under the command of one Aldridge, a cheesemonger, who lived some time in Bread Street . . . they fall upon a small party of Sir Michael Livesey’s foot, who were on guard at the two houses, which we call the half-way houses, between Sandwich and Sandown, beat them off, and took possession of the houses. Sir Michael’s horse taking alarm, charged the enemy with abundance of gallantry, routed the Party, wounded many, killed eight or nine upon the place, and put the rest (they having first fired the Warriner’s house) to flight. Among the prisoners taken, Aldridge was one …”

On 14 August a larger landing attempt was made, under Major General Gibson and Sir John Boys, they were sent from the ships with orders to attack Colonels Rich and Hewson in their trenches.

“They marched by Upper Deal in good order, and on being discovered, 300 musketeers were drawn off under Colonel Hewson, and Major Husbands with 100 horse. The Princes’s forces marched up with great resolution and to prevent the Parliament’s horse from annoying them had marsh ground for their action and retreat, which put the horse upon a loss knowing how to engage, but Major Husbands wheeled about in a way of retreat. This occasioned the Prince’s men to advance to firmer ground in confidence of victory, which the Parliament’s horse took advantage of, flanked the Prince’s men, and were almost in the rear of them. The 300 musketeers at the same charged the Prince’s men and put them in disorder, and the Parliament’s men fell to execution.”

During this skirmish Sir John Boys was shot in the stomach, although the buckle of his hanger absorbed most of the impact of the bullet; he also sustained a cut to the neck and a wounded head from the butt of a musket.

On 23 August news was fired into Deal Castle on an arrow of Cromwell’s victory at Preston, most Royalist hope was lost and 2 days later Deal’s garrison surrendered, followed by Sandown on 5 September, this finally ended the Kentish rebellion.

It was reported that Sir John Boys survived from his wound he recieved at sandown and was imprisoned for a short time..

In 1656 he is mentioned as being in contact with King Charles 11.

At the instigation of Sir John Boys in January 1660 the Kentish cavaliers published at Canterbury a declaration calling for the return of their King he was also involved in an intrigue to raise Kent but was overtaken by the event of the fall of Richard Cromwell in May 1659 and the subsequent dismissal of the Rump in October 1659 which led to Boys being imprisoned at Dover Castle for ‘petitioning for a free Parliament’, but was released on 23 February 1660. On 11th April 1660 he was dining on board the Swiftsure with Edward Montague off Deal, awaiting a packet ship to Holland to tell Charles 11 of the defeat of Lambert.

Upon the return of King Charles II Sir John Boys was made Governor of Dunganon castle in Ireland, where he served until 21 June 1664 due to ill health it was recommended that Sir John Boys, took absence from his command in Ireland, for two months, he died just over 3 months later at his house at Bonnington on 8th October 1664 and was buried in the parish church of Goodnestone near Adisham, Kent, by his first wife, Lucy,

He had five daughters by his 1st marriage and no children by his second marriage to Lady Elizabeth Finch, widow of Sir Nathaniel Finch, Sergeant-at-Law, and daughter of Sir John Fotherby of Barham in Kent.