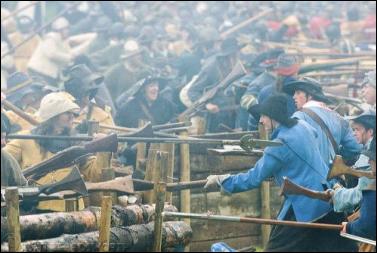 Basic foote soldiers, fight with five foot long Matchlock Muskets which are firing replica’s of the actual weapons used in the 1600s. They form “blocks”, attack at about 25 metres firing volleys, then using the butt of their musket as a club, and finally their swords to engage the enemy in hand to hand combat. We do not actually use shot in the musket, only gunpowder and wadding. Full training will be given and you have to pass a safety test before you are allowed to use a musket or a sword on the battlefield. Dummy muskets are used prior to this. A lot of the falling over is done by ‘dummy’ musketeers (usually recent recruits who don’t yet have shotgun licences or haven’t passed their Sealed Knot musket safety tests).Although being a musketeer does not require the full body contact that being a pikeman does, it is none the less just as enjoyable and exhilarating.